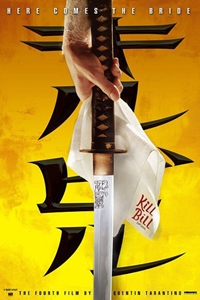 An entire wedding party is slaughtered during a dress rehearsal in a rural chapel: the pregnant woman in the blood-splattered wedding dress is Black Mamba, better known as The Bride. The assassin, Bill, and his circle known as The Vipers left The Bride for dead, but unluckily for them she was merely comatose. Four years later, The Bride suddenly awakens from her coma and realizes what has been done to her. She sets off on a ferociously focused mission, setting out to seek revenge on her former master and his deadly squad of assassins. One by one, she kills the various members of the assassin group. She saves Bill for last.