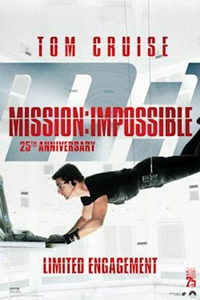 Tom Cruise ignites the screen in the hit big-screen blockbuster that launched one of today's biggest, and still-growing, action movie franchises. Ethan Hunt (Cruise), is a top secret agent, framed for the deaths of his espionage team. Fleeing from government assassins, breaking into the CIA's most impenetrable vault, clinging to the roof of a speeding bullet train, Hunt races like a burning fuse to stay one step ahead of his pursuers... and draw one step closer to discovering the shocking truth. Directed by Brian De Palma (THE UNTOUCHABLES), with a screenplay by David Koepp (JURASSIC PARK), this original MISSION celebrates its 25th Anniversary.