TIMECRAFTERS: The Treasure of Pirate's Cove 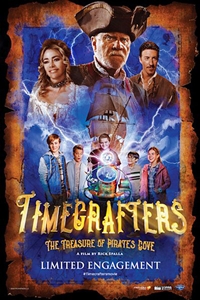 A pirate crew led by the dashing Geoffrey Pistol launches a daring mutiny, stealing away in the night. Captain Lynch awakes to find his first mate gone along with his precious treasure map and vows to chase the mutineers to the gates of Hades. As Pistol navigates a stolen vessel through a treacherous storm, a strange "Time Machine" mechanism below deck is activated and the ship disappears in a flash of swirling, blue energy.