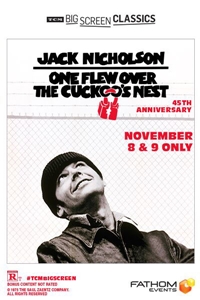 When free-spirited petty crook Randle P. McMurphy (Jack Nicholson) arrives at the state mental hospital, his contagious sense of disorder jolts the routine. He's on one side of a brewing war, soft-spoken, coolly monstrous Nurse Ratched (Louis Fletcher) on the other. At stake is the fate of every patient in the ward.